Funeral flowers and their meanings

Why are flowers used for funerals?

Flowers have been used for funerals and funeral-like rituals for thousands of years, though the role they play has changed in that time. Before embalming was developed, flowers were used primarily to cover the odors emanating from the decaying body, with the amount of flowers used being dependent on other factors such as the environment, the state of the body and the time of burial.

These days, flowers are used as a way for us to express our feelings and respect for the person who has passed away, and to offer condolence and comfort to the bereaved. At a time when it can be difficult to find the words, flowers can speak for us. Just the presence of beautiful displays of flowers at a funeral can evoke feelings of solace in mourners.

What do different flowers mean?

Meanings for flowers can differ depending on their colour and where in the world you are, but below are the most popular flowers used in UK funerals, along with their common meanings.

Roses
Roses are one of the most popular flowers for numerous occasions including funerals, with each colour having a different meaning. White roses symbolise purity and innocence, red means love and respect, pink represents gratitude to the deceased, yellow symbolises friendship whereas dark crimson signifies sorrow and grief. 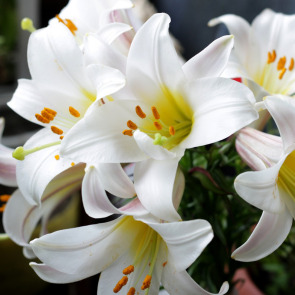 Lilies
Another popular flower for funerals, lilies often symbolise innocence, purity and life after death. White Stargazer Lilies are most popular for funerals, meaning sympathy and compassion, but Oriental Lilies can be used to represent eternal life and Peace Lilies symbolise rebirth.

Carnations
Carnations are another popular choice for funerals, as they last a long time. White carnations symbolise innocence, pink shows remembrance and gratitude while red suggests strong feelings of love and affection.

Orchids
Overall orchids represent love and beauty, but as with the other flowers on this list, different colours carry different meanings. White commonly shows reverence, innocence and purity, while pink represents sympathy and mourning, both colours commonly chosen for funerals.

Gladioli
Gladioli flowers symbolise strength and integrity, and come in a vast array of colours making them a popular choice for funerals. 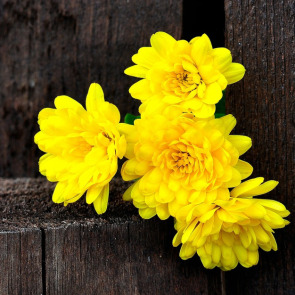 Chrysanthemums
Chrysanthemums are known as a typical funeral flower in many parts of Europe and Asia, as they are thought to symbolise grief. In the UK, they are known more to show friendship but are still a popular choice for funerals.

When choosing flowers for a funeral, you may also want to think about the preference of the person who passed away, and the cost of the flowers. It’s also important to remember to take into account the wishes of the family when choosing funeral flowers - some families would rather have donations in their loved one’s name rather than flowers, so it’s worth checking beforehand.

I hope you have learned more about the kind of flowers traditionally used in funerals and their meanings.

Follow funeral-notices.co.uk on social media to see when new articles are published: